“Home is where the heart is.” Pliny the Elder   Roman scholar, naturalist, and historian.

The blue sky and water welcomed me as I crossed the Chowan River Bridge on Tuesday and my heart whispered, Home. 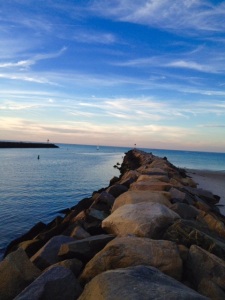 As a child, my husband spent his summers at a cottage on Chautauqua Lake in New York state’s Southern Tier and we had our honeymoon there. But in 1976, my husband’s parents bought a house near Sesuit Harbor on Cape Cod Bay. For twenty years we crossed the Bourne Bridge to spend vacations with our children at Harbor Beach, playing in the waves and watching the sunset. In Mom’s kitchen there, a plaque read, “Does the sound of the sea end at the shore or in the heart of those who love her.” If I listened with my heart, I could always hear ocean waves no matter how far away I traveled and picture myself walking on the sand. 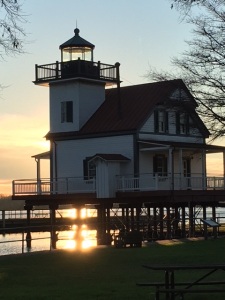 Edenton speaks to me that same way. It has since the first day I visited, not knowing then which of the 19 counties of my territory would become our home. I drove in from Winton from my office and crossed the river looking at the light sparkle on the water with a growing excitement and a sense of deja vu.

Walking from The Captain’s Quarters b&b, I arrived at the harbor just in time to watch the sunset over the water. It was breathtaking. Standing there, the Sound claimed me. I called my husband only to learn Doug had just spoken to the Pastor Nominating Committee from Edenton’s First Presbyterian Church and had an interview scheduled. Little did I know then that I would fall in love with the land as much as the water.

Three months after that first visit, the crape myrtles lining West Queen Street welcomed us to our new home which I would come to think of as “The Shore.” As we walked to town, down to the harbor, and home again we saw porches and gardens, large and small, filled with lovely flowers unknown to me.

Our backyard had a porch and lots of trees, but mostly fence and grass. Making Edenton our home meant taking the Extension Master Gardener’s class and creating a garden of my own. I learned to love taking out grass, creating and edging new beds, even  composting. There was no problem that didn’t come into better perspective after I “dug in the dirt.” 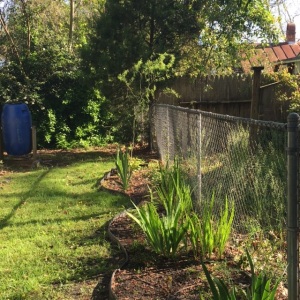 Slowly, I learned about plants I had heard of, but never seen in the north, like jessamine and honeysuckle. Part of our welcome to Edenton came in gifts of plants shared as touches of grace. Hostas, caladiums, crocosmia, hydrangeas, coneflower, bee balm, canna, iris, curly willow trees, and tulip poplar were graciously given and gladly received. Across our fence, Esther, an elderly Moseley neighbor, shared gardening insights and bulbs. Southern hospitality bloomed everywhere.

Ever since our son moved to Raleigh to become a Tarheel, I have loved North Carolina. Moving to Edenton made me a talking billboard! I would proclaim its charm, boasting about the historic houses, the Trolley tours, the Founding Fathers who lived here, speaking with pride of Penelope Barker organizing the first political protest by women at Edenton’s Tea Party. I would promote the Candlelight Tour and the Pilgrimage, inviting everyone who’d listen to North Carolina’s prettiest small town. 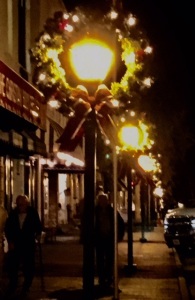 Especially at Christmas, as we walked past the Christmas wreaths on the vintage lampposts on our way to dinner in town, I felt a sense of peace and of place. It was a wonderful life and Edenton was home. My home.

I have lived many places, but not every place feels like home. If home is where the heart is, it is like falling in love, if you do, you feel as if you’ve always known that person, that place, as if you were meant to be together.

Doug taught me that you tune a guitar by plucking a note and adjusting the peg of the string to be tuned until it vibrates to that note. This resonance with the tone of this place, feeling in sync with the rhythms of Chowan county and its people, vibrates my heart-strings. And now, whether I am at Colonial Park or at our new house near Raleigh, a part of my heart beats to the gentle ripples of the Sound, and I can envision the Lighthouse against the setting sun and picture myself walking Edenton’s streets.

So, as the time approached when Doug would retire and we’d move closer to family in Raleigh, nostalgia became a constant, and I feverishly worked to “complete” my garden. I wanted every bit of the long fence to have plantings. I wanted to leave something behind as a remembrance that if only in a bit of altered landscape, something was different in Edenton, even if just slightly, because I had lived there. 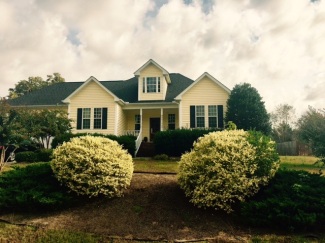 We moved in December. As spring came, I began my garden here in Willow Spring. Here, at the house I call Holly Cottage, I again found few plants and an empty fence. It made me homesick. So, Tuesday, I came home, over the bridge, back to Edenton and my garden. Most things there had to remain, a sort of living legacy.

But I wanted to enrich my new home, my new garden, with bits and pieces of Edenton. So, I dug up seedlings and divided bulbs. I uprooted a sampling of irises. and will relocate a lilac bush barely hanging on in the too shaded garden to a sunnier spot at my new house.

From our screened porch in Willow Spring, we now watch new birds come to new feeders. I really like our house…and feel stirrings of love growing.

Yet, Edenton is forever in my heart, and as I look out at plants that began there and now will bloom here, I hope I will hear a resonance, that the song of the Sound and the notes of a charming town will carry and help me once again find home.

Writer living in North Carolina. Originally from upstate New York. I love my family, my community, and my friends, and embrace 'living deliberately' in the world, trying to make a difference. I have written an as yet unpublished book, The Call, an epic fantasy with historical fiction and folklore elements. My blog is for other writers, for those who love a good read, and for all who, like me, are looking to find and live their call.
View all posts by joanneeddy →
This entry was posted in Inklings, Views from my porch and tagged "does the sound of the sea end at the shore, Albemarle Sound, Cape Cod Bay, East Dennis MA, Edenton, Edenton lighthouse, finding home, gardening, gardens, Home, Home is where the heart is, Master Gardener, ocean, Roanoke River Lighthouse, Sesuit Harbor, Sound bridge, the sea, What makes a place feel like home. Bookmark the permalink.