Finding Angels – On The Christmas Crèche

Posted on December 9, 2013 by joanneeddy 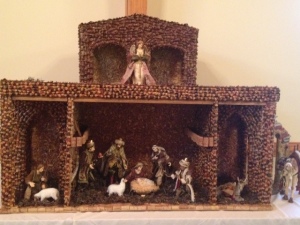 The background to this post is this was a grueling week. Our students have been trying to complete their GEDs before the end of this semester because, come January, the tests will change. Not only will they be harder, but if a student hasn’t completed all the tests, the ones he has passed will no longer count. So, five times as many students tested Wednesday as is typical, and the pressure feels enormous. There is one week left and the last test on our campus is this Wednesday, for many their last chance to graduate.

On the home front, Friday we traveled to Raleigh so that Doug could consult with an ENT specialist, who confirmed he will fairly quickly need surgery. She was concerned enough to get us an appointment with a Duke throat surgeon first thing on Monday. So a tough week on all counts.

Being a social worker at heart, though my faith is very central to who I am, I try to write my posts respecting all perspectives, even the choice of non-belief. But this post comes with a disclaimer, this is a post about my husband, and it is also a story about faith. 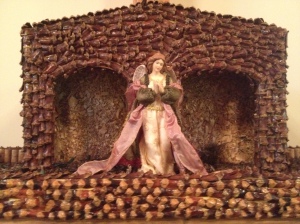 Doug is a pastor. He’s not the kind that has you call him by that title, or any title. He prefers to be called simply, Doug. I think part of that is because he wants to be real, to have a genuine relationship with all those he meets, and not have the stereotypes about clergy stand between him and creating a caring relationship. He is a very human and humane man. He is also someone whom God called to serve here in Edenton and that leads me to the story.

When we were getting ready to move here, our daughter worked in customer relations for a construction company. Gretchen has a fondness for the elderly and having worked for a senior care organization, a real gift with them. One of her clients was building a home with space for her father, and Gretchen and he connected. In the course of one conversation, she told this gentleman that her father was moving to North Carolina to come to a new church. His response was a gift and a Christmas blessing.

The man was a German immigrant and woodworker. He told Gretchen that he would be giving up carpentry when he moved to his daughter’s new home. He explained he had just enough materials for one last project, and said he would like to make something for Doug’s new church, then he asked if the church had a crèche. Doug checked, and surprisingly, it didn’t.

Focused on the move, we thought little of the gift, not knowing what to expect. We spent that summer packing. He spent it crafting a magnificent gift. 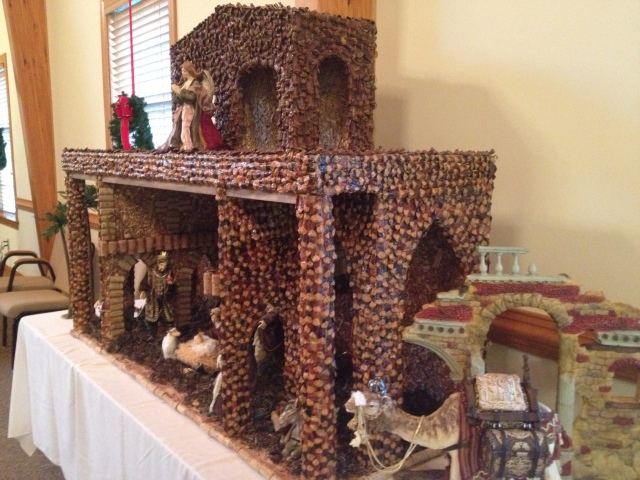 More than five feet wide and two feet tall, this two-story stable is not delicate, but heavy and sturdy. The inside is rough, the outside is thatched in the bracts of Longleaf Pine cones, layered one on top of another, glued individually. I can’t even imagine how many. They are sharp to the touch. There are three rooms in the main stable and one above. Rough shelves line the walls in the main room. The floor is covered in dried seaweed. Like the stable in which Christ was born, there is rudeness, yet a simple beauty. 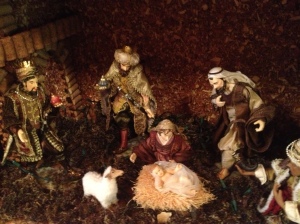 Of course, without the family, the baby, the Kings, the shepherds, this would only be a stable. So the gift included finely made porcelain figurines, dressed in cloth, homespun for the family and shepherd, elegant and ornate brocade for an angel and the kings, their robes embroidered and trimmed in gold braid, with finely crafted gifts. There’s a rough wooden stave for Joseph, woven bags and baskets for the shepherd and donkey, tassels and damask cloth adorning the camel, feather tipped palm trees and a straw filled manger, all stunning in their splendor. 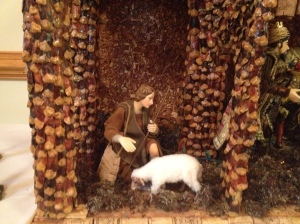 This week was the second Sunday of Advent. Its theme is hope, hope that came to a dark world in a dark time, hope that was born into a raw setting. Awaited, but unexpected in purpose, hope designed according to a plan we human beings barely grasp. Celebrated by angels, visited by kings who kept him secret but proclaimed by common shepherds, unvarnished hope was born, the kind of hope that stands in the face of anything.

Do you find yourself in need of it? I do. I need to follow the star with the kings. I need to listen to the songs of the angels and go looking for the baby with the shepherds. I need to come to the manger of Bethlehem and say Lord, have pity on me, on my students, on your servant, Doug, on the flock that is my family.

And when I reach that stable, I want to remember a man who had one last crèche for a church he never saw and a man he never met. That is what hope is. It is reaching out in faith because you feel a call to do so. It is giving one last gift. It is belief that God is guiding you and will always lead you to your destination, a star to guide you, angels waiting to welcome you. Home.

Writer living in North Carolina. Originally from upstate New York. I love my family, my community, and my friends, and embrace 'living deliberately' in the world, trying to make a difference. I have written an as yet unpublished book, The Call, an epic fantasy with historical fiction and folklore elements. My blog is for other writers, for those who love a good read, and for all who, like me, are looking to find and live their call.
View all posts by joanneeddy →
This entry was posted in Writings by Wordsmiths and Others and tagged Bethlehem, Christ, Christmas, Christmas creche, Creche, Finding Angels, Jesus, Lord, Manger, North Carolina, the hope in a manger. Bookmark the permalink.

2 Responses to Finding Angels – On The Christmas Crèche