Finding the Infinite – A Lesson on Seeing God Blindly 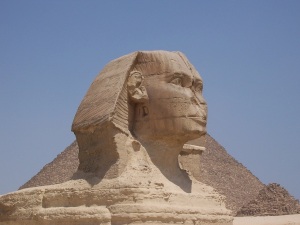 “Questioning Life and Destiny and Truth,

I sought the dark and labyrinthine Sphinx,

Who spake to me this strange and wondrous thing:

“Concealment only lies in blinded eyes,

And God alone can see the Form of God.” 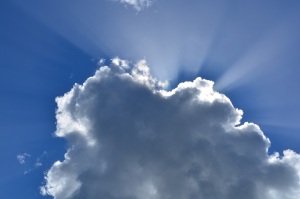 I sought to solve this hidden mystery

Vainly by paths of blindness and of pain,

But when I found the Way of Love and Peace,

Concealment ceased, and I was blind no more:

Then saw I God e’en with the eyes of God.”

Why do we find that infinite questions often leave us struggling in the darkness, blind, groping for answers? To some degree, I think this happens because of our human tendency to act as if ultimate issues should be approached the same way as all the other ordinary issues in our lives are, as if there is a list: pick up bread and milk, drop off the dry cleaning, get a new job, create world peace, define the meaning of life.

Grappled with the infinite is not a tick it off question of mastering the next challenge in our life or solving the next riddle. It is not easy and it doesn’t happen just because we want answers, simple answers, when life gives us hard questions.

Well, unless we are Oedipus. The myth has it that Hera sent for the Sphinx from Egypt to guard and thereby imprison and punish Thebes. Anyone who wished to live long enough to enter had to answer a riddle posed by the Sphinx who, resting upon a rock above the city, had the body of a lion and the head of a man. She asked Oedipus, “What has one voice but walks on four legs in the morning, two at noon, and three in the evening?”

It was a life or death question…and ironically an answered question that would ultimately end by leaving Oedipus blind.  His answer:  “Man.”

There’s the rub…the answer to infinite questions is not man, but God…or if you are inclined differently to me, the highest power, the universe, or perhaps the eternal. The Sphinx was an agent of a god and so could only pose questions that must, by their nature, lead us to the “more than man” answer.

Oedipus “did not see” that he had always been wrestling with the infinite question of his destiny (to kill his father and marry his mother) and in attempting to flee from it, he fulfills it. Running from his supposed parents in Corinth, he comes to a crossroads and in a dispute with his unknown, but real, father, he kills him. Later, discovering his victory over the Sphinx gave him the crown and his mother as his consort, he sees his destiny and puts out his eyes.

In Hamlet, with echoes of Greek tragedy, Shakespeare said, “What a piece of work is a man! How noble in reason, how infinite in faculty! In form and movement how express and admirable! In action how like an Angel! in [his own] apprehension how like a god!”  The Danish prince should have listened to the Greeks. Running from our destiny, running from god as if we were God doesn’t work, but leads to “paths of pain.”

Saul, the self-righteous avenging angel of the Law, would be taught that same lesson on the Road to Damascus. When confronted by Christ, he would be blinded, healed as a new man, Paul, he would only then become the agent of God.  We have to look a little deeper to see that Saul was already blind before he took his path to the crossroad, believing he was following God’s will in his acts of persecution he was blind to who Christ was and ironically the act that took his vision restored his sight, his ability to actually see God and his call as an apostle.

It seems simplistic to say, but human eyes barely perceive all the elements of the finite. They cannot see the infinite.  In fact, the more we focus on the ordinary around us, the harder it is to capture a vision of the divine. That takes a different type of sight, a vision built on trust and faith, more like the oracles of old who were sightless, but who saw through the eyes of their god.

Seeing the infinite is about being blind to everything else that distracts our focus. Finding the infinite takes blind faith and the willingness to follow a still, small voice that leads from darkness into the light. It really is only through seeing ourselves and our world through God’s eyes that we are able to see God.

Allen says, “Such is he who has entered into the Infinite, who by the power of utmost sacrifice has solved the sacred mystery of life.’

This week I started by pondering the divine in my life, trying to understand the mystery of life and death. This weekend will be the anniversary of the death of my sister.

Everything I’ve read and found has been a puzzle that I keep trying to solve. It reminds me of the struggle in the movie, The Matrix, where the protagonist tries to bend a spoon with his mind. He asks a child who does this easily what the secret is, and is told, “There is no spoon.”  I think for me, as a finite being, I have to stop trying to reduce the infinite to bite size finite pieces I can understand. The answer is that isn’t the answer. The infinite cannot be captured that way any more than you can pour the ocean into a thimble.

Instead, at least for today, I am embracing blindness, deciding it is ok not to understand …and instead of trying to hold God in the palm of my hand, I will let God embrace me with His.

Writer living in North Carolina. Originally from upstate New York. I love my family, my community, and my friends, and embrace 'living deliberately' in the world, trying to make a difference. I have written an as yet unpublished book, The Call, an epic fantasy with historical fiction and folklore elements. My blog is for other writers, for those who love a good read, and for all who, like me, are looking to find and live their call.
View all posts by joanneeddy →
This entry was posted in Writings by Wordsmiths and Others and tagged Answers about life, Blindness and sight, destiny, Finding God, Finding the infinite, God, Hamlet, Hera, Oedipus, Paul on the road to Damascus, Questioning life and death, Running from destiny, Searching for God, Seeing God, Seeing with blind eyes, the Sphinx, There is no Spoon. Bookmark the permalink.