Posted on February 4, 2016 by joanneeddy

“Disaster Strikes. Almost before the dust settles, the dog and handler teams are there, searching for victims alive and dead. With a sense of smell far more powerful than man’s and an ability to probe nooks and crannies that humans cannot penetrate, these dogs save lives and bring comfort to the families whose friends and relatives succumbed in the tragedy.” Canis Major.com

On September 11, 2001, the World Trade Center Twin Towers were attacked and fell.

On September 14th, a group of volunteers, staff, and officers from The Salvation Army in upstate NY went to provide support to the first responders at Ground Zero.  My husband and I were among them.

By the 15th, we were working at an aide station set up on a dust-covered girder that had fallen from the South Tower (WTC2) providing food, water, and a listening ear when weary firefighters came down from “the pile” where, assisted by rescue dog teams, they dug with shovels and carried debris in buckets, urgently searching to find survivors.

I was reminded of this by two recent events…and the first led to the title and thought behind this post.

Over the last few years, my husband has had a number of health issues which may have been caused by our exposure to the dust and toxic air at Ground Zero. Last week brought a trip to the ER and a hospital admission.

One of Doug’s doctors expressed admiration for our service in New York.  In trying to compliment our work there, he told us that in the movie, American Sniper, when Kyle was still a young boy, his father tells him that there are three kinds of people: wolves, sheep, and sheepdogs.  The doctor then thanked us for being sheepdogs.

When I heard this, I thought it was a great compliment. I think of sheepdogs the way good shepherds are described in the Bible: as those who care for the sheep, who guide and protect them, and if they are lost go and find them. Those are the pictures in my mind, though I know sheepdogs will also fight wolves and other predators to protect their flock. 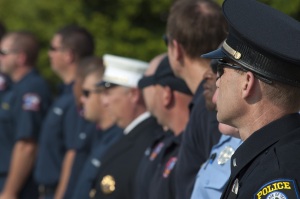 Then, I looked up the quote.  As used in the movie, I learned the sheepdog reference was intended to indicate those willing to use violence to protect people. That is certainly true of our police and military, but not a real fit for Doug and me.

As I thought on it more, I realized that it did fit the NYPD and PAPD who served and died on 911, as well as passengers on United Flight 93 who attacked the hijackers, and the military who went on to fight in Iraq and Afghanistan. They are those kind of sheepdogs in the truest and most noble way.

Doug and I, like the firefighters of FDNY, are more search and rescue dogs.  We go after the sheep. We lead them to safety even if we risk our own lives. At our best, that is what firefighters, ministers, and social workers do.

It reminded me that in those early post-disaster days, when I told firefighters how much I admired their brotherhood, their commitment to each other and their work, they told me that I was their adopted sister. It felt true. They did feel like family, an extended pack of search and rescue dogs, committed to the same kind of work.

The other event that really brought this metaphor home to me was a trip to the 911 Memorial.  Right after Doug was discharged from the hospital, Gretchen and I went to New York City.  (I went to have a medical consult there, last Thursday, again a possible residual from my time at Ground Zero.)

The next day, we went to the 911 Museum.  Our visit was profoundly moving to me, and I will post more on that later. Being able to see all they have preserved, from a damaged fire truck, to a fallen firefighter’s helmet encased in a glass box, to the remaining support beams that upheld the North Tower (WTC1) was both emotional and healing. Walking the ground there with my daughter and showing her where I was during my time there meant the world to me.

Firefighters, clergyman, police, FBI, iron workers, social workers, volunteers, and the military were everywhere working at Ground Zero.  Noble dogs…ready to lay down their lives for the sheep. It is the greatest honor of my life to be among them…it was a gift to share that experience with Doug and all who served.

A link to a post about my experience:  911: In the Ashes of My Brothers

Writer living in North Carolina. Originally from upstate New York. I love my family, my community, and my friends, and embrace 'living deliberately' in the world, trying to make a difference. I have written an as yet unpublished book, The Call, an epic fantasy with historical fiction and folklore elements. My blog is for other writers, for those who love a good read, and for all who, like me, are looking to find and live their call.
View all posts by joanneeddy →
This entry was posted in Writings by Wordsmiths and Others and tagged 9 11, 911 Disaster, 911 Memorial, FDNY, FDNY at Ground Zero, Firefighters and Social Workers, Ground Zero, In the Ashes of My Brothers, NYPD, On Being a Rescue Dog, On serving at Ground Zero, PAPD, Search and rescue, search and rescue dogs, September 11 2001, September 11 attacks, Shanksville PA, Social work, Twin Towers, United Flight 93, wolves sheep and sheepdogs. Bookmark the permalink.

2 Responses to Rescue Dogs – On Firefighters and Social Workers