“A lobster lives within a rigid shell. As the lobster grows that shell becomes confining. The lobster feels itself under pressure and uncomfortable. It goes under rocks to protect itself, and casts off the shell, replacing it with a new one….which eventually also becomes confining…So, the stimulus for the lobster to grow is that it begins to feel uncomfortable…I think what we have to realize from this is that times of stress are times of growth.” Quote from a video by Dr. Abraham Twerski

When our children were two and six, my husband’s parents bought a home on Cape Cod. So, our vacations were spent relaxing at Harbor Beach in East Dennis. One of the kids’ favorite activities was to create their own pond, dug in the sand near the water, and then fill the shallow pool they created with whatever “denizens of the deep” we could find..

With my best recollection of an old Irish Rovers’ song, Gretchen and I would sing  “shellikee, shellikee buukiee, come out and show ur harn, all the ladies are waitin,” to the snails. Chris had a net that he used to catch Blue and Fiddler crabs as they ran sideways in the shallows, some tiny shrimp, and the occasional minnow. 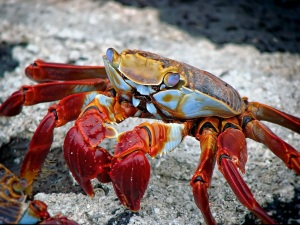 All of us would scour the tide-pools left by the retreating tide behind the barnacle covered rocks for hermit crabs. We spent endless hours watching their interactions. 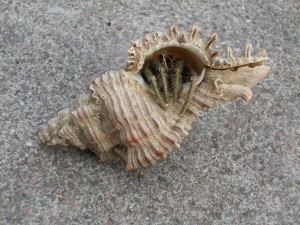 As the children grew, they ranged farther in the hunt, but I was content to sit and read and “guard our pool.”

Now, this included the need to summon the children to dig a new one nearer the water if the tide began to go out, or father back if it began to come in. A tough job, but so is the watchman’s work.

Another part of my job, given me by Gretchen, was to “keep the Hermies from fighting.”

Unlike other crustaceans, hermit crabs, to put it kindly, are recyclers, or scavengers if you are less kind to them. They don’t grow their own shell, like lobsters do, for their vulnerable abdomens but rather find abandoned snail shells and move in.  When they are little and first pick a shell, they can retreat all the way in.  To move, they stick out their head, legs, and claws, pick up their new homes and skitter along.

As they grow bigger, they no longer fit in their shell, becoming vulnerable. A hunt for a new home is critical.

I learned a lot from watching them. Our pond limited their possibilities, but it was not unlike being caught in a tide pool. If they were in a shell-rich environment, (if there were a lot of empty shells and just a few of them), the ones looking for a new place to grow could run from shell to shell trying them on for size.  Of course, this was done thoughtfully, I assume, because when you abandoned a shell you risked some other Hermie taking it.

Those were the risks: keep the shell you knew though more and more of you grew exposed every day, or take a risk of locating a new home that was a good fit and offered more safety. That was tough enough if you had choices.  We also saw what happened if the choices were few.

If our pond created a more stress-filled environment by holding few empty shells, what we saw was war.  We didn’t do this deliberately, of course, and it took a while to figure it out. But with limited choice, our hermit crabs fought over what was available.

What set me to thinking about all this is the video on stress I saw yesterday by psychiatrist and rabbi, Dr. Twerski (the quotes above)

In general, as I posted in Finding the Door, I agree with Dr. Twerski. I do believe that crises in life create dangers, but also the opportunity for change. Stress and discomfort can absolutely signal a time of growth. But thinking about lobsters led me to remembering the hermit crabs, then new thoughts on the impact of limited resources. I think stress may be a lot more complex for hermit crabs than it is for lobsters.

Lobsters, when they feel the stress of too small shells, have the ability to grow a new one. They undergo an internal process which is innate and done easily. Lobsters face no competition for shells and fewer risks than the hermit crabs. They go through stress, create new growth, rest for a bit, and resume their lives.

The hermit crabs face the same inevitability. They will outgrow their shell. But they must actively abandon their old confining shells and find another. On some level, there is choice. I have even seen them try out a new shell, find it doesn’t fit them, and return to the old shell. Yet, that choice is only possible if there are shells to be had.

I think it may be that most of us are lobsters.  We have resources. So while growth may be uncomfortable for a bit and somewhat stressful, we handle it relatively easily.

But some of us are more like hermit crabs. Change and growth may be very risky. In a world of limited resources, striking out in the hope that the choice will result in a new future can be like playing musical chairs and being the one without a chair in the end. Having worked with impoverished people with limited educations and unsupportive families, with the homeless, and those fighting mental illness, I have watched this struggle. Yet, many lobsters think everyone is a lobster and opportunities and stress are equal for all. They’re not.

Given that I saw the video yesterday and that yesterday was Super Tuesday, that may have shaped my thought. Sometimes it feels like everyone in our world is fighting over the same shell and our politicians tell us there aren’t enough shells to go around. Some of them even tell us our shells feel too small because someone else wants them.

But there really are enough shells. Gretchen and I found a way to stop the hermit crab wars. The answer was to add empty shells. It really is a big ocean. There are lots of shells. My children and I brought them home by the box load. I guess we are lobsters. But if we don’t insist on keeping them all to ourselves, everyone can at least be safe. 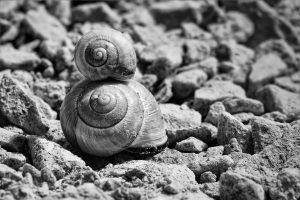 We could go first. I don’t know about you, but though I would like to hide out in a comfortable shell for a while, I know growth is coming. It always does. I don’t know if you feel more like a lobster or a hermit crab. Maybe you have enough resources for the next change you face and just want to move forward. But I’ll take my place with the hermits, and go one step farther. I’ll give you my shell. All I ask is for you to have my back while I look for another, or maybe you have one to spare? Maybe, just maybe, you’ll help me look? And I can’t help thinking, if we all worked together, we could probably find one for all of us.

Writer living in North Carolina. Originally from upstate New York. I love my family, my community, and my friends, and embrace 'living deliberately' in the world, trying to make a difference. I have written an as yet unpublished book, The Call, an epic fantasy with historical fiction and folklore elements. My blog is for other writers, for those who love a good read, and for all who, like me, are looking to find and live their call.
View all posts by joanneeddy →
This entry was posted in Writings by Wordsmiths and Others and tagged Dr. Abraham Twerski, Joanne eddy, Lobsters and Hermit Crabs, Rabbi Twerski, Stress, Stress and lobsters, Stress and lobsters and hermit crabs, stress as part of growth, stress in times of change, Super Tuesday and Hermit crabs. Bookmark the permalink.