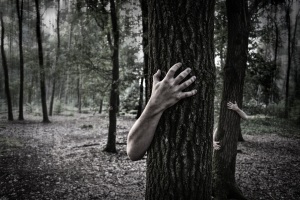 “From ghoulies and ghosties
And long-leggedy beasties
And things that go bump in the night,
Good Lord, deliver us!”
~Scottish saying

I was born and did my first trick or treating in Dayton, Ohio where both October 30th and 31st were celebrated. The 30th was Beggars’ Night, and we would go house to house crying, “Beggars’ night, give us a bite.”  The 31st, we’d make a second round…or go to houses we missed the first night for “Trick or Treats.” 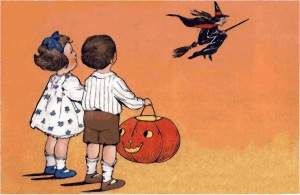 When we moved to Utica, New York when I was in Second Grade, I was surprised to only have one night of treats…but pleased by the popcorn balls and candied or caramel apples that were handed over by our well-known neighbors or the treats shared at a table set up and decorated in their garages. Though the number of houses on our street would expand over the years we lived there, initially we knew every neighbor well….except one, the people who lived directly across the street from our house.

The Bonitos were ghost people. At least the kids in the neighborhood thought they were. They had no children and were almost never even glimpsed. Mr. Bonito mowed the lawn at dusk and into the dark. Occasionally, we would see the garage door open, and a car pull out…but the Bonitos were as elusive as the fish whose name they carried. 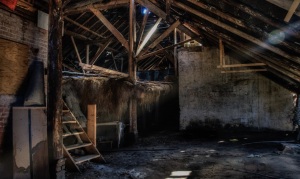 Most damning of all, the Bonitos lived in their basement.  At night, there were never lights on in their living room, only faint flickers from their basement windows.

Who knew what they might be doing in the dark! We imagined the worst about that basement. And stories grew up around these neighbors.  It was said they poisoned the dog from the house to their left for daring to run into their yard. 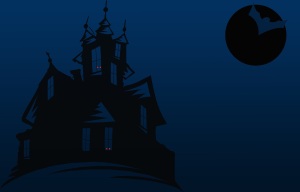 Of course, many of us were convinced that any child who ran into that yard to retrieve a ball was risking their life to go get it. Surely, you would be kidnapped and dragged to the basement. It was a sign of courage to even quickly run to the edge of their grass on the border of the street and touch your foot to it and run home. Balls that landed on their yard stayed there.

On Halloween, theirs was the only house with no porch light on. As little children we ran past their house as fast as we could.  Of course, as we grew older and braver, or maybe crueler, the biggest trick and largest dare the “big kids” could face was a challenge to actually run up to their porch and ring the bell and yell Trick or Treat.

Of course, serious bragging rights went to the kid brave enough to stay on the porch waiting, rather than just running in, ringing the bell, and running off just as quickly.

Then, one day I was the big kid.

I remember my heart was thumping in my chest when I ran up their driveway and onto their porch.  I pressed the doorbell and it seemed my heart bumped up into my throat, pounding in my ears. I counted to 20. It was as long as I could stand it, and just as I turned to race away I thought I heard a hushed voice hoarsely cry, “Go away.”

It is fair to say all of us lived in fear of the Bonitos. They were the neighborhood bogeymen.

Of course, it was a long time later before I began to wonder what it might be like for them to be seen that way, or to wonder if they might even have lived in fear of us.

It was the 50s and the baby boom was in full swing. Our neighborhood was bursting with children. We played kickball in the summer, and even skated on the road  in winter when our street would be coated with ice for a few days after every storm before trucks would arrive to shovel cinders onto it. The neighborhood was filled with children, and we ran in large groups.

What must it have been like to be childless in that time? Was that a choice or a terrible disappointment. Did it feel like it excluded them from the life in the neighborhood? Were their lights off to save money, did they use candles only as much as they needed and could afford?  Were they lonely? What if instead of tricks we had brought them treats? Could we have changed their lives by bringing them cookies or by being nice? 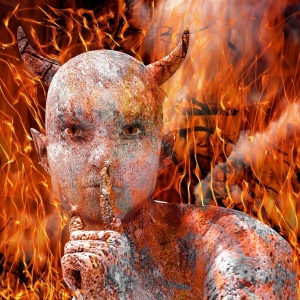 Now I wonder, were they the bogeymen or were we?

Maybe that should be the lesson to take from Halloween. It can absolutely be innocent fun when children dress up and seek treats.  And that is all it generally is. But it can become serious business to begin demonizing others, just like Halloween can stop being fun when tricks begin being played, candy poisoned, houses egged, car windows soaped, toilet paper webbed on bushes or even rolls of it set aflame.

In this time, as we approach an election that has specialized in demonization I find myself thinking about this lesson from the Bonitos. It is a reminder to me to beware of seeing demons in difference, to befriend neighbors, to reach out to those who are isolated and alone, to make fair assessments and judgements based on facts. And yes, to add a prayer or two that we all be delivered us from things that go bump…even when that bumping is in our own chests.

Note:  I have added a link of this blog to a linked blogging site sponsored by Stevie Turner a blogging friend from England… tap on this link to view a number of posts, including her, and add a link to your blog if you’d like.  InLinkz

Writer living in North Carolina. Originally from upstate New York. I love my family, my community, and my friends, and embrace 'living deliberately' in the world, trying to make a difference. I have written an as yet unpublished book, The Call, an epic fantasy with historical fiction and folklore elements. My blog is for other writers, for those who love a good read, and for all who, like me, are looking to find and live their call.
View all posts by joanneeddy →
This entry was posted in Inklings and tagged blaming others, demonizing difference, demonizing people, Halloween, marginalizing people, trick or treat. Bookmark the permalink.

23 Responses to Things That Go Bump